Isto and Lisa participated in the On shifting grounds – the study of archaeological practices in a changing world Conference 3-5 October 2019 in Rethymnon, Crete. ​ 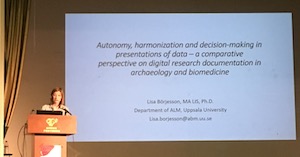 The conference was organised by COST action Archaeological Practices and Knowledge Work in the Digital Environment (ARKWORK) in collaboration with the Department of History and Archaeology of the University of Crete, and chaired by Åsa Berggren (Lund University), Antonia Davidovic (University of Heidelberg) and Theodora Moullou (University of Crete). Lisa gave a keynote at the conference titled "Autonomy, harmonization and decision-making in presentations of data – a comparative perspective on digital research documentation in archaeology and biomedicine". Isto presented preliminary theoretical considerations relating to the CAPTURE project in a talk titled "Where to find archaeological information work and how to CAPTURE it".  The conference programme contained several fascinating presentations from the perspective of CAPTURE. Paul Reilly (University of Southampton) discussed troweling as a part of and archaeological investigation that is not generally documented and showed examples how a part of it can be captured using artistic methods. Matt Edgeworth (University of Leicester) reminded of the multiple agencies and materialities of archaeological work practices and their interplay. Allison Mickel's (Lehigh University) keynote made a simialr healthy reminder of the visibilities and invisibilities of the expertise and role of different groups of people working on the site, and hoe especially the role of the local experts is often omitted in reporting, and when described, done in a more positive light than participants self experienced it.   Zachary Batist (University of Toronto), Felix Rösch (University of Göttingen) and Delia Enqvist (Kalmar University) all discussed evidence-based work on analysing and describing archaeological practices that resonate well with the work we are conducting and about to start within CAPTURE project. Mary Leighton's (University of Michigan - Ann Arbor) ethnographical work on the failures of North/South American fieldwork collaborations showed clearly how breakdowns help to see what the practices are and how they differ from each other. To the end of reaching a more systematic understanding of different types of practices, Jeremy Huggett (University of Glasgow) presented a potentially useful new model for deconstructing certain features of archaeological practices that can be especially useful in analysing different aspects of the automation of how archaeology is achieved.   As we know previously and are hypothetising, archaeological practices and especially their traces take many different forms that can be captured and used in multiple different ways - but their usability depends a lot on why and for what purposes practices are tried to be understood. Costas Papadopoulos' (Maastricht University) talk about 3D scholarly editions highlighted further the problems of documenting the differences and conveying them in a manner that is both useful and workable in practice and that could turned into a communicative 'standard' comparable to textual scholarly editions.